Omanfil is proud to have deployed workers who are now very successful in their chosen field partly because they were given a chance by Omanfil to gain international experience. This section spotlights the many success stories of OFW's who have not only done excellent work overseas but have also transitioned back to the Philippines and have been recognized by their peers and fellow Filipinos for their achievements and contributions.

An excerpt of "His Inspiring Cinderalla Story" by: Rica Roldan 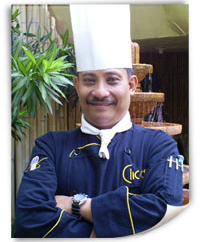 Chef Boy is the second child in the brood of eight of fisherman Justaniano Logro and wife Consorcia , Chef Boy had very humble beginnings. The family lived in a small house by the sea, where the young boy could hear – and even feel – splashing of waves.

Chef Boy did get to study, but he never got to high school because his parents could no longer afford to send him to school. Nurturing the dream of going back to school and somehow improving the quality of his family's life, he at the age of 13, went with his uncle to Manila to work and earn living.

His first job was a houseboy in a Chinese Restaurant in downtown Quiapo. He did not know how to speak Tagalog. His salary was P50 a month for cleaning all three floors of his master's house and for going to Quinta Market Daily. Chef Boy is industrious and creative, he did not waste the opportunity to learn. After cleaning the house, he would go down to the restaurant and help out in the kitchen, kneading dough's for siopao and assisting the chef cook lechon kawali. Since he was only learning to speak in Tagalog, he would at night, get a notebook and draw the vegetables that he saw in the kitchen, give them his own names to them, and make illustrations on how to cut and cook them.

Eventually, Chef Boy moved to Astral Villa Restaurant (later to become Josephine's Restaurant ) in Makati. I was there where he met Spanish Executive Chef Antonio Cuadrado Perez, who generously shared his talent with eager protégé'.

By the time Chef Boy started working as a restaurant in Matabungkay and then Bayview Plaza Hotel, he was very adept in the Kitchen, his Tagalog was perfect and he was learning to converse in English. His life made a complete turnaround in 1982 when he left the country to work as sous chef at Sultan Qabass Bin Said's Palace in Oman. The opportunity to do so has presented itself was back in 1978, but Chef Boy decided against it. But with a wife and kids to provide for now he took challenge, not knowing exactly what awaited him in the foreign land.

Oman didn't turn out to be the bed of roses for him, but he persevered. He tried to get along well with the Egyptian Chefs, learned to speak Arabic, and took his job seriously. He made an impression on the Sultan, who grew very fond of him and thus appointed him as head chef. He accompanied His Majesty on International trips, where he was exposed to Spanish, French, English and Turkish gastronomy. Eventually his family joined him in Oman, and his Majesty provided them with a palatial house. They lived among ambassadors and enjoyed the best that life has to offer.

But Chef Boy's heart longed for home and so, after eight years he and his family finally came home. He joined Manila Diamond Hotel in 1992 as one of the sous chefs. Promotion came in his way and in 1995, he earned the distinction of becoming the first and only Filipino Executive Chef in a five-star deluxe hotel in the Philippines.

After years of distinguished service as the Chef of the Sultan of Oman, and later on as the Executive Chef of Manila Diamond Hotel, Chef Pablo "Boy" Logro chose to settle down in a small town closest to his heart. It was in General Mariano Alvarez, Cavite that he realized his full potential, this time as a Chef Instructor and mentor to students of his unique culinary school. He established the Chef Logro's Institute of Culinary And Kitchen Services, has attracted a local, regional, national and international following. The School is located in Gen. Mariano Alvarez, Cavite Philippines.

THE SECRET OF HIS SUCCESS

Apart from having high standards in International food preparation and an insatiable passion to learn, Chef Boy attributes his good fortune to an unwavering faith in God. As Chef Boy always says "Nothing is impossible with God, since I was small I've always had a strong faith in God. It was God who gave me everything and I try to give back a part of it by helping others. I also make it a point to pray before serving each dish I make, it never fails."